Save The Climate (read here the song lyrics)

About ‘Changing World’ Michel Montecrossa says:
“CHANGING WORLD presents songs about our times. The environment changes and we face an urgent need for change of consciousness. New thinkin’, new awareness, new attitudes are needed. We must change our habits. We must adapt to the unfolding crisis. We must confront daring questions and chilling consequences. We must be ready to live on a planet with dwindling resources. We must halt global energy wars. We must find new ways of progress. They are there in our consciousness – if it changes.
That’s what CHANGING WORLD is all about.”

Talking U.S. Deep Freeze’, is Michel Montecrossa’s New-Topical-Song calling for world wide unification of leaders and nations for action against climate change. Michel Montecrossa speaks out in his song: ’When nature dies we are at the end of our road.’

Quotes by Michel Montecrossa on Climate Change & our planet: http://wp.me/paKe4-54H

What Can We Do To Change The Climate Change? (read here the song lyrics)

Michel Montecrossa says about ‘Land Under Water’:
“‘Land Under Water’ is an admonishing New-Topical-Song prayer dedicated to all flood victims. We are flooded by water as the result of climate change. We are flooded by all kinds of evil as the result of no or too little consciousness change which in turn increases the speed of climate change. The land is under water in the outside world as well as in the inner world and both worlds ask the same question: ‘When will man grow up in consciousness?’”

Michel Montecrossa says:
“The song ‘Talking Climate Change In Daily Life’ was written at the time of the Atlanta snow storm debacle as the cold signal that climate change finally has reached our daily life. A debacle of climate change that will more and more hit the mega cities around the world in many ways from heat waves to deep freeze, from earthquakes to storms and more. The grim reality crisis of climate change is not only ecological, but very soon becomes an economic crisis, a humanitarian crisis, a social crisis and a spiritual crisis.
The answer to all this is not the blame game but application of high ethics showin’ the conscious way that has the power to save. It’s the way of Love and Sweetness – that’s what I say.“

Michel Montecrossa says about his song ‘Give The Planet Energy Of Life – Gebt Dem Planeten Energie Des Lebens’:
“The climate change is speeding up and the banka gangstas and polito corruptos are speeding into their show-down of darkness. Therefore I say, it’s prime time for giving the planet energy of love which is the true energy of life and the ultimate energy of the people of the world.”

Quotes by Michel Montecrossa on Climate Change & our planet: http://wp.me/paKe4-54H

Listen to Mirakali’s Song ‘Soul Of A Planet’

Find here on this website much more music and art by Mirakali: https://yoursuccessinspirer.com/tag/Mirakali/

Song Lyrics
Soul Of A Planet

Soul of a planet,
the home of millions of beings.

The wonder of life unfolds itself since thousands of years.
It‘s Gaia, goddess of planet earth.
She knows from where she comes from.
She knows the ocean of light of transcendent gold.
Every earthquake is her trembling question
who is man, what is his way, what will be his destination?

Does man know that we are one,
feeling the Soul of our planet, of our home?
“Tune into my heartbeat strong
and become the children of another morn!”

Find great songs and videos by Mirakali on the Michel Montecrossa Blog:

Find here many more music and art by Mirakali on this website: https://yoursuccessinspirer.com/tag/Mirakali/

Mysterious Earth
Tender blue light of a star.
Mysterious light of a newborn life.
Soul of a living planet, like a dream.

It recognizes that it is real
what it has seen in the magic night
when all the stars whispered
of a mysterious new birth,
the coming of a new world into our world
rising like a sun after a long dark night.
All coldness disappears, warm rays
heal the pain and bring back the light.

Wonder of a new life,
magic of a beautiful soul,
soul of our mysterious earth
where we live, where we are at home
to be conscious, to be strong.

Find great songs and videos by Mirakali on the Michel Montecrossa Blog:

The New-Topical-Song ‘New President #T‘, released by Mira Sound Germany on Audio Single, DVD and as Download, is Michel Montecrossa’s USA President Song apropos the Trump Inauguration and Presidency. It is a song looking beyond smallness into the greater meaning of U.S.A. Presidency.

Michel Montecrossa says about his New-Topical-Song ‘New President #T’:
“THE U.S.A. PRESIDENT MUST BE A PERSON WHO IS CONSCIOUS OF THE TRUE DESTINY OF THE U.S.A. TO BE THE LEADER TOWARDS HUMAN UNITY.
THE U.S.A. PRESIDENT MUST BE GOVERNED BY THE WISH TO HELP TO MAKE REAL THIS HIGHEST AND NOBLEST IDEAL OF MANKIND BY TAKING THE LEAD IN THE BUILDING OF THE UNITED STATES OF PLANET EARTH FOR THE GOOD OF ALL.
THEN THE WAY IS OPEN FOR CREATING LASTING PEACE, PROGRESS AND HAPPINESS ON EARTH.”

Love World Action saves
when politos are goin’ mad,
when career and money take the place
of ideals in polito-corrupto-heads,
when war business is the cold lord
of banka-gangstas void of Love
for Humanity and Future and Hope.

Love World Action saves
when the big economies bring
more war industry to earth
instead of standing for Peace
and Human Unity
in the United States
of Planet Earth.

Love World Action saves
when people lose their faith,
when nations are falling apart
listening to Tea Party stuff
or nazism dark
creating a void in the heart.
“Love is the savior”, I say,
“from the Bright Earth smart.”

Love World Action saves
is my answer great,
is my answer when all explodes
into revenge and more blood,
greed and torture and the big collapse,
for my love and I we know and see:
Love brings the Bright Earth for the true and free.

Love World Action saves
no sanction can do that, no lie,
no bluff, no crime,
no trick, no dirty deal,
no death and no war field
can bring what Love can bring:
The Bright Earth of Strong Love Power
in you and me.

Lyrics & Music: Michel Montecrossa, © Mira Sound Germany

The song ‘Trees Of Our World’ by Mirakali: audio track, song lyrics, and video

SONG LYRICS
Trees Of Our World

Wind in the branches
of the trees on the hill.
The sun rises with glory.
Golden the light, warm and bright.

Tears drop into the grass,
sparkling like dew.
I wonder ‘bout the beauty
the creator has done.

There we stand under the trees
I love so much.
A feeling of infinity,
emotions of gratitude, wideness in the heart,
silence in mind and just experiencing.

I always wanted to sing a song
‘bout the trees of our world.

But I can’t find the words
to express what is there deep within.
A wish comes from there:
‘Please protect our planet,
our home, our place where we live.’

A dream comes from there:
‘A green planet, a paradise reborn on planet earth.’
… and then comes another tear
falling into the grass
sparkling like dew. 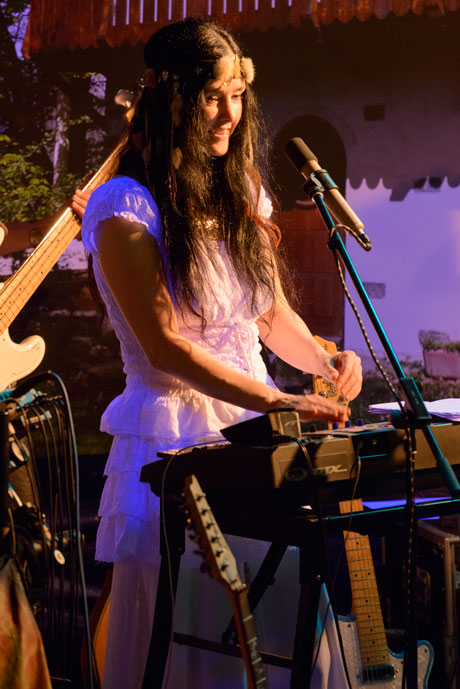